So the F-day is here and Mozilla Firefox 3.0 is ready for download. Servers are currently down but you can get it from the FTP site. Mozilla has not even had time to fix their first-run page – it’s still referring to the Release Candidate 3. I guess we will see a record in downloading the next 24 hours. 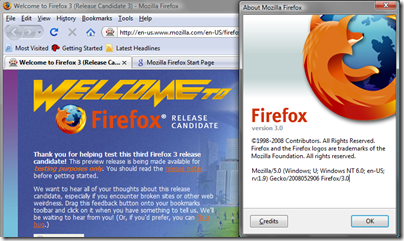 I had some strange experiences while installing it. I installed it over beta 5, therefore the location of Firefox was in the Program Files\Mozilla Firefox Beta 5\ folder and after a few minutes I had the first crash of Fx since beta 3 or something.

For me it’s Firefox time. I have not until the 3.0 beta releases really liked Firefox, but now it is here to stay! But don’t get too excited, Internet Explorer will still be my primary browser…

Microsoft recently released the Origami Experience 2.0 for Windows Vista, download it here. This is an update to the Microsoft UMPC interface. The Origami Experience is designed for small screens with touch-capabilities, but after just trying it out on my laptop with Vista Ultimate I figured – some of these features would fit into the Media Center interface perfectly. There are a lot to say about the Windows Media Center interface, I think it is quite good – needs some fixes though; why are films divided in three categories – Videos, Recorded TV and DVD’s?

It’s summer and time for some vacation, finally. This year has been hard work so far – and I don’t expect it to get lighter this upcoming autumn and winter. I’ve had fun though! Microsoft SharePoint has really been one thing occupying my work – it feels like everyone is not just looking at SharePoint, they want to use it now! We have a couple of cases that is really interesting and I hope that I have convinced them and proposed a nice solution.