I’ve seen it asked numerous times on forums and I’ve been asked over and over how to interpret the encoded claims - so here it is: a post which will show you all the secrets behind how claims are encoded in SharePoint 2010.

Updates: - 2012-03-09 Added Forms Authentication info. - 2012-03-11 Updated with information about how the claim type character is generated for non-defined claims

If you have been using previous versions of SharePoint 2007, been working with .NET or just Windows you should be familiar with that (NETBIOS) user names are formatted DOMAIN\user (or provider:username for FBA in SharePoint). When SharePoint 2010 introduced the claims based authentication model (CBA) these formats was not sufficient for all the different options needed. Therefore a new string format was invented to handle the different claims. The format might at first glance look a bit weird…

The claim encoding in SharePoint 2010 is an efficient and compact way to represent a claim type and claim value, compared to writing out all the qualified names for the claim types and values. I will illustrate how the claim are encoded in SharePoint 2010 focused on user names, but this claim encoding method could be used for basically any claim. Let’s start with an illustrative drawing of the format and then walk through a couple of samples.

The format is actually well defined in the SharePoint Protocol Specifications in the [MS-SPSTWS] document, read it if you want a dry and boring explanation, or continue to read this post…

The image below shows how claims are encoded in SharePoint 2010, click on the image for a larger view of it.

Note: the f (Forms AuthN) as trusted issuer is not documented in the protocol specs, and this is what SharePoint uses when dealing with membership providers (instead of m and r). For more info see SPOriginalIssuerType.

For full reference of claim types and claim value types, look into the [MS-SPSTWS} documentation. 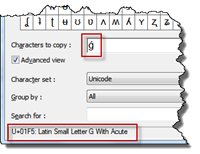 (Added 2012-02-13) If you are creating custom claim providers or using a trusted provider (as original issuer), you will see that you get some “undocumented” values in the Claim Type (4th) position (that is they are not documented in the protocol specs). The most common character to see here is ǵ (0x01F5). If the claim encoding mechanism in SharePoint cannot find a claim type it automatically creates a claim type encoding for that claim. It will always start with the value of 500 increment that value with 1 which results in 501. 501 is in hex 01F5 which represents that character. It will continue to increase the value for each new (and to SharePoint not already defined) claim type. The important thing here to remember is that these claim types and their encoding is not the same cross farms, it all depends on in which order the new claim types are added/used. (All this is stored in a persisted object in the configuration database)

Some notes: the total length must not exceed 255 characters and you need to HTML encode characters such as %, :, ; and | in the claim values.

If this wasn’t clear enough, let’s look at a few samples. 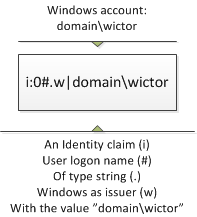 Another common claim. This time it’s not an identity claim but an identity provider claim, and this is how NT AUTHORITY\Authenticated Users is represented. 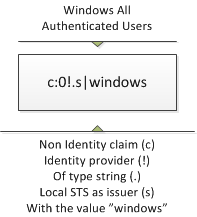 This is how a Windows Security Group is represented as a claim. The value represents the SID of the group. 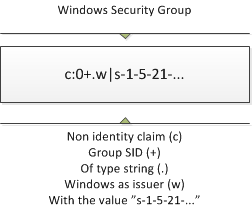 If we’re using federated authentication (as in the Azure AuthN series I ’ve written) we can see claims like this. It’s an e-mail claim from a trusted issuer called Azure. 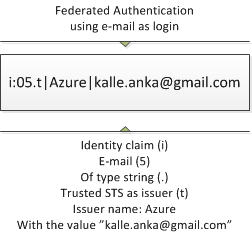 Here’s how a claim can be encoded if we’re having a role called facebook in the trusted issuer with the name Azure. 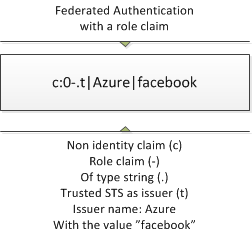 This final example shows how the encoded claim for the Local Farm looks like. It’s a Farm ID claim from the system Claim Provider and the claim value is the ID of the farm. 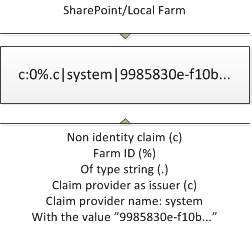 This is how a forms authenticated user claim looks like. 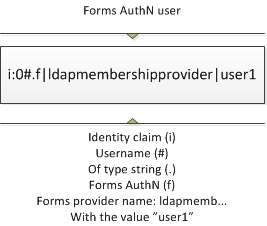 I hope this little post showed you all the magic behind the claims encoding in SharePoint. It’s quite logical…yea really.

A couple of months back, when the weather was grey and it was cold (well, it still is here in Sweden, glad I did a tour to the Riviera last week), I wrote a post about how Claims encoding works in SharePoint 2010, simply called “How Claims encoding works in SharePoint 2010”. In that post I discussed how SharePoint encoded Claims from relatively long descriptive claims, containing URN’s, to a smarter and shorter format - smaller to store, faster to compare format etc.

Well, by know everybody living in the SharePoint world are sitting with their best tin foil hats on and installing, configuring and fiddling with SharePoint 2013 Preview, which was announced today by mister Steve. I’ve been fortunate to be a part of the (debated) closed beta for some time and have been trying out the new version of our favorite product. You probably will be overwhelmed with blog posts over the next couple of months, up until the SharePoint Conference 2012, and continuing after that.