The last few days I’ve had trouble with the Windows RSS platform and Internet Explorer 7 on Windows Vista Ultimate. The feeds are updating fine but the notification has been troublesome, for example the feed folders never updated the number of unread items in the folder even though there were unread items in feeds in the folder, look at the image below.

This also caused some trouble in the msfeedicon utility, the Windows RSS Platform notification application, which threw an exception for this. So I made some tests and using the Windows RSS Platform API’s. These test showed the exact same problems and; a manual count of the feeds for each folder resulted in the correct number of unread items but the TotalUnreadItemCount on the IFeedFolder interface threw an exception.

So I exported all my feeds to an .opml file and then manually removed all feeds (it’s a shame that you only can remove one feed or folder at a time in IE7, maybe that’s something for an upcoming version of msfeedicon?). 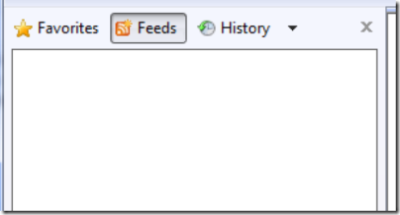 As you can see from the screenshot above the feed icon still has that small star on which shows that there are unread items - but there are no feeds!

Then I imported the .opml file, refreshed all feeds and marked all as read (using msfeedicon) and the folder now reported four unread items - and all feeds beneath was marked as read. I waited a few minutes and restarted IE a few times to be sure that it was a problem.

So I had to dig deeper!

I browsed to the %USERPROFILE%\AppData\Local\Microsoft\Feeds\, this is where the Windows RSS platform stores the current subscribed feeds, and took a quick look at the files. One file, FeedsStore.feedsdb-ms, had an older date than all the imported feeds files. So I shut down all IE7 instances (as well as msfeedicon) and removed that file. Fired up msfeedicon and IE7 and refreshed all feeds - and voila everything was fine again.

It feels like there was som unstable state in the Windows RSS Platform feeds database. I don’t know why it happened and how, but it’s now gone on my PC.

Anyone else experienced the same or similar problems?

Aaron Brethorst has published part two of his UAC and manifests series, this time he shows us how to embed the manifest into a managed application using Visual Studio 2005.

Today Windows Update with Windows Ultimate Extras contained new or updated versions of the Hold Em Poker Game and BitLocker and EFS Enhancements.  If you check the versions of the files you can see that it’s some kind of update: Hold Em Poker Game New version: 6.0.6000.17034 Previous version: 6.0.6000.17015 But the BitLocker secure key backup utility have the same version, 6.