In this post of the Office 365 Groups for Admins series I will talk about the small but important policies we can apply to Group creation.

At the moment there is very little control of the actual Office 365 Group creation in Office 365. And this tends to be one really important aspect of the Unified Groups discussion - can we allow them or not? I do hope that I over the time can update this post with new and improved governance features.

One of the few configuration options you have for the Unified Groups is how they are named when created. You do not configure this from the Groups settings in the Admin portal, where one could expect it to be, but rather under Admin > Exchange > Recipients > Groups. Then click on the ellipsis (…) and Configure group naming policy: 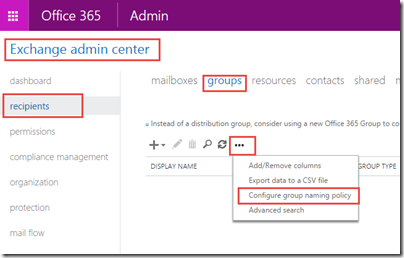 An important thing to remember is that these policies only applies to when an end-user creates a Group in the user interface (web or Outlook 2016), not when an administrator creates them using PowerShell.

Under the General configuration of the Group Naming Policy you can configure name prefixes and suffixes. Not that this is only for the display name for the Group, not for the e-mail alias or anything else. The prefixes and suffixes can be based on an Attribute or plain text. Attributes are read from some of the user account properties; for instance City, Company etc.

In this screenshot below I have configured both prefixes and a suffix. Each Group will now get a name as follows: ‘Group’. That is for instance “Contoso Stockholm Project X Group”. 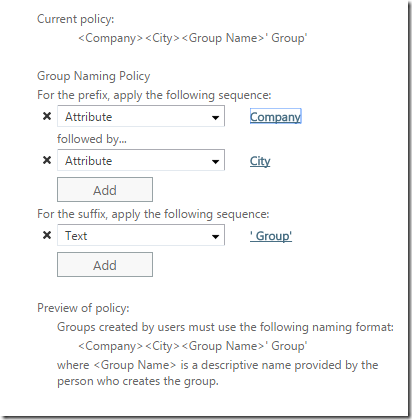 The example above is pretty bad though. Now if someone creates a group called “Project X Group”, this is what they will see an interface like below: 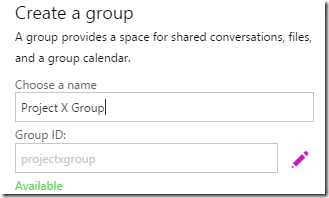 But when the Group is created it will actually look like this: :) 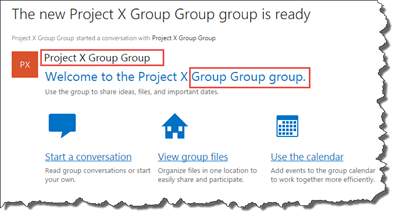 Nevertheless, it is a good idea to actually  configure at least a prefix, that will make sure that your GAL looks a little bit prettier.

Since everyone can create Groups it is a good idea to block some words from the Group naming. Names that you don’t want to see in your GAL and other entry points. This can be done with the Blocked Words feature: 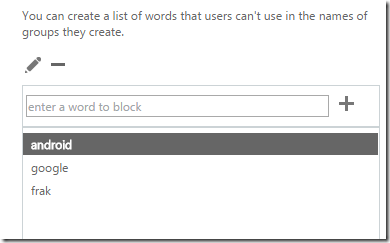 There are a couple of interesting ideas on the Office 365 Uservoice site I recommend that you vote on:

If you’re enabling creation of Groups in your Office 365 you should consider configuring your Group Naming Policies. Unfortunately the options at the moment are limited to the display name - hopefully we will se better options for this in the future.

This is the third post in my Office 365 Groups for Admins series and it will focus on one of the primary tasks an Office 365 Admin has to do once their tenant is up and running; should we allow our users to create Office 365 Groups or not? I’m not going to give you an answer to this. It is something you need to evaluate properly within your organization, but I do recommend that you initially always turn off Groups, so that you can get some governance into the game before promoting it to everyone.

In this post of the Office 365 Groups for Admins series we will take a look at how you as an admin and your end-user can create Office 365 Groups. The option to allow end-users to create Unified Groups or not are determined by the Mailbox Policy, as described in a previous post. End-user creation of Office 365 Groups End-users have two ways of creating new Groups; either use the Office 365 web interface or using Outlook 2016 (works on the PC edition, not sure about Office on Macintosh).