This is a story from the trenches where Excel Web App in Office Web Apps 2013 refuses to render Excel documents, while other Apps such as Word and PowerPoint works just fine. The end-users are met with the generic error message: “We’re sorry. We ran into a problem completing your request.” 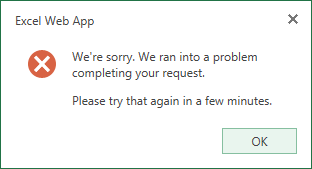 The problem is easy to solve but can be somewhat difficult to locate and in this post I will show you how to find the issue and fix it.

Whenever Office Web Apps 2013 fails to render a document it shows the end-users a generic error message without any details. Fortunately the Office Web Apps Server contains good logging mechanisms and will in most cases give you an idea on where to solve it and in some cases it’s written in clear text.

This specific issue, for the Excel Web Apps, shows itself in three different places (except for the error message that is shown in the user interface). First of all “normal” sys admins will see a couple of errors in the System Event Log manifesting itself like this:

Pretty nasty messages which does not give you a clue, except that something is horribly wrong. There are also lots of Dr Watson log entries in the Application log which might cause the admin to start looking up the Microsoft support phone number.

The more “clever” admin then knows that Office Web Apps actually has it’s own log in the Event Viewer. When checking that log messages like the following are shown for the Excel Web App:

This should actually start to give you an idea – something is wrong with the Performance Counters on this machine. Worst thing to do here is to start fiddling with the registry and try to fix it or start adding users/groups into the performance counter groups.

The “smartest” Office Web Apps admin then takes a look at the Trace Logs (ULS) (and that admin most likely read my SharePoint post “The Rules of SharePoint Troubleshooting” – if not, he/she should!). This is what will be found:

The key thing here is the “Category does not exist” message.

The fix for the problem is easy – we just need to register/update the performance counters for ASP.NET. This is done using the lodctr.exe tool like this:

Give it a few seconds and then retry to load an Excel file using Office Web Apps and all your users should once again be happy.

A simple fix to an annoying problem, which could be difficult to locate unless you know where to look (and in this case also have the skillz to read some reflected code).

This error might not be so common, but it shows the importance of having a correctly installed machine and that you shouldn’t go fiddling with settings or the registry if you’re not really sure on what you’re doing – ok, not even then…

If you have been working with SharePoint you should know by now how to get the build version of an installation using PowerShell. Knowing the version of the installation is crucial for troubleshooting and knowing what features or limitations the current installation has, given the new release cadence. If you don’t know how to do it then Bing for it and then return here. But how do you do the same for Office Web Apps Server 2013?

Introduction We all know that one of the most important parts of SharePoint 2013 (and 2003, 2007 and 2010) are SQL Server. Bad SQL Server performance will lead to bad SharePoint performance! That’s just how it is! There are tons of ways of doing this by having enough cores, adding more RAM, using fast disks, using multiple instances and even servers. You should all already be familiar with this. Search is one of the components in SharePoint that requires A LOT of resources, especially when crawling and doing analytics.