Today was the meeting when the Swedish standardisation organisation, SIS, was to vote on the Office Open XML standard.

I have observed this procedure, but not actively participated in it since the first working group meeting a few months ago. At that time it felt pretty comfortable and the Yes vote was in reach. 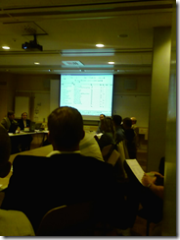 When this day approached both camps, the pro Office Open XML team and the no-sayers both gathered their forces for the final battle. We all entered the meeting at the last possible minute and we all was signed in to the meeting.

Starting with IBM, a number of representatives ran out of the conference room mumbling and cursing when they realised in which direction the vote would go - and the vote result was clear to most of us. After a presentation round and a round of all members commenting their voting intentions, we all thought that it would be a quick vote.

The representative from IllumiNet, flanked with Sun and Google, did try to convince all the yes-sayers for a long time and the discussion went pretty harsh! I have to give credit to the guy, who fought for his cause and really had put some time into the specification. Finally someone asked him “if ODF was up for voting, would you let it pass through”? After some thinking he answered “No, I would not!”. This ended the discussion.

The vote went quick and it was 26 25 votes for yes and 6 for no. Read the press release from SIS here (in swedish).

UPDATE: Correct amount of yes votes is 25. 26 was taken from my head when writing this one and 25 is according to my meeting notes.

The XPS site at www.microsoft.com/whdc/xps just had an extreme makeover, to fit in to the new Microsoft website. It is basically the same content but easier to read and look on. It seems like not all is done yet, some pages still have the old layout, so I expect some more improvements/additions… The most interesting thing is the new XPS Technology Showcase part which contains references of XPS enabled hardware and software.

The NiXPS guys has done it again, they have created an XPS viewer for the Mac platform. Read all about it on their blog. The XPS viewer is a part of their upcoming version of the NiXPS platform, which is a cross-platform application for inspecting and manipulating XPS files. It is currently in beta but I think that this new version with the improved XPS previewing abilities will really boost the application.