Visual Studio 11 Developer Preview is now available for download für alles and it does not only include the Windows 8 stuff like the previous preview did - this one contains the thing we all want - the SharePoint Developer tools.

Overall the performance of Visual Studio 11 is blazingly fast! I regret I tested it - since I will go back to 2010 tomorrow (or even tonight). They team has done a great job and included a lot of the PowerTools natively; such as the new Solution Explorer, the improved search feature etc.

But, back to the SharePoint Developer tools 11! What’s new for all the kool kids! Here’s a few highlights.

We all love our CAML, FieldRefs etc. But it isn’t that productive. VS11 contains the long awaited Content Type Designer and also a very similar designer for Lists.

When creating a list you have a great view to create Views: 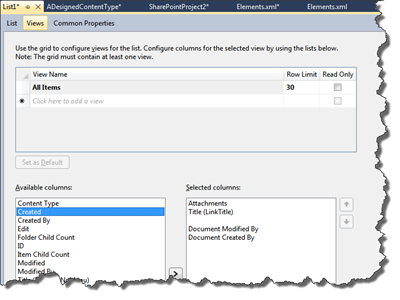 New features in the Office 365 space for Visual Studio was an easy bet. They have incorporated the things from the SharePoint Power Tools, such as better compile time support for the Sandbox etc. The best feature here is the Publish feature, which allows you to publish your package to a URL or local directory. You can now publish a SharePoint WSP directly to the sandbox in Office 365 - but you can’t activate the solution from within Visual Studio. 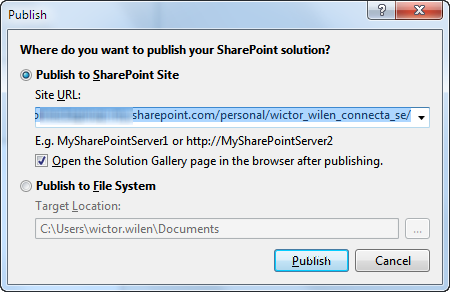 There are much more improvements such as profiling support, better JavaScript debugging support etc. Read all about the new stuff here: http://msdn.microsoft.com/en-us/library/ee290856(VS.110).aspx

But…you really need to test it out. I’m really looking forward to start working with projects in VS11!

It is always fun to get back on site after a couple of days off work. SharePoint 2010 is like an annoying little critter, if you’re not there to cuddle with it it will do the most strange things. I currently have a support case open regarding some issues with crawled properties (I hope that will be another story to tell another day) and went into the Search Service Application admin pages in Central Admin to check some things.

For a couple of weeks (ahem, months) I’ve been struggling with a strange Search Service Application issue. Some time back I went to check out on some Crawled Properties when making a tool to help copying settings between SSA’s (more on this tool in another post). Then I noticed that there were tons of Crawled Properties with just garbled binary data(!) as the property name. I searched like crazy for a while to find where these came from, there was nothing in the logs of any kind related to this.