Besides SharePoint my very dear topics is performance optimizations and new technologies, so here’s a post mixing all these together.

Using a distributed cache such as AppFabric can solve many problems. I’ve already mentioned a few such as the problems with in-memory caching. Other interesting things is that you can easily set up cross farm caching or even cross domain caching. You can have the caching on separate servers in the application tier. You can share the cache between web applications and service applications. The cache isn’t tied to the application pool so any recycles of that will not clear the cache and so on…

AppFabric v1.1 CTP is really easy to setup. You install the binaries (download 1.0 via Web Platform installer or 1.1 directly here) on the first machine to host the distributed cache and configure the cache. Then you add new servers to that cache cluster. Very much like you do when setting up a SharePoint farm. Follow these instructions on MSDN, you can’t fail (which you can’t say with SharePoint). 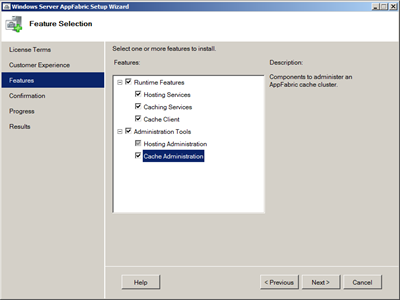 Configuration is used either using the configuration application or using PowerShell (what else did you expect). In this case I configured it to use SQL Server as backend. Using the disk based would ideally be used in cross farm/domain scenarios (think about that - having data up to date cross farms, that’s cool!). Once AppFabric is installed you need to start the AppFabric caching  using the following PowerShell commands. First use

to set the context and then just

to start the cache. There is one final configuration that is needed and that is to allow the application pool account to access the cache. This is done using the

cmdlet. If you forget to set this you will see an ERRCA0017 error. AppFabric contains tons of configuration options. You could setup different clusters, named caches etc etc.

Using the cache in a Web Part

Now on to the SharePoint bits. In this scenario I’ll build a Web Part that fetches quotes from Yahoo, that is doing an HTTP request to get a quote. This is a common scenario where you would build some kind of cache to avoid HTTP latencies. Another problem with HTTP requests is that they might time out or take a long time. You need to call it at least once so the poor bastard that’s loading your page first might suffer from it. In this case we could actually create a timer job that makes the requests and put the data in the AppFabric cache before it’s requested. But for this simple demo let’s settle with a Web Part.

Before building the actual Web Part we need to set up the project to use the AppFabric cache. First two references must be added; Microsoft.ApplicationServer.Caching.Core and Microsoft.ApplicationServer.Caching.Client. They are found in the c:\Windows\System32\AppFabric\ folder (even though some documentation says otherwise). I could not directly add them as reference in Visual Studio, it could not find the directory, so I copied the file from that folder to a custom folder first.

After adding the references we need to set up the configuration of our custom cache. Normally you do this using the application configuration file, but in SharePoint scenarios this doesn’t work that well, so I’ll do it all in code. In this sample I use hardcoded values for servers and ports - in a real world scenario you should of course make this configurable using for instance the P&P SharePoint Guidance Hierarchical Object Store. To access the cache we need to create a cache factory and retrieve our cache from that. Creating the cache factory object is an expensive operation so I’ll implement this in a singleton thread-safe object to avoid creating the factory that many times. It looks as follows:

Then let’s add the Web Part to the project. In the Web Part class implement the function to get the stock quotes as follows:

It’s a simple method, GetQuote(), that retrieves the stock quote using the Yahoo Finance API. If the quote is found it returns a Quote object with correct values and if not an “empty” Quote object.

Also add a property to the Web Part so that we can turn on and off the caching:

Now it’s time to implement the actual Web Part, and as always it’s done in the CreateChildControls, like this:

So let’s take a look at this Web Part now using the Developer Dashboard (notice the SPMonitoredScopes I added to the code). Here’s how it looks without the cache enabled. The call to the Yahoo Finance API takes about half a second - a real performance killer.

Once we turn on the caching, the first call to the CacheUtility class will initialize the cache and for subsequent calls use that cached factory and cache. Notice how the first hit which creates the cache actually takes some time and in this case the HTTP request takes a really long time!

Then once the cache is up and running, retrieving the quote takes almost no time.

But it still takes about 10ms! This 10ms comes from that this is not an in-memory cache, it is actually stored in SQL Server. But hey, it’s better than a couple of seconds. But I want to save an extra couple of cycles here. Ok, let’s enable the client cache! Add the following row when configuring the cache factory and you will also have an in-memory cache that has a maximum number of object, a timeout and an invalidation policy.

And now retry the Web Part and we’ll see that this is more efficient:

The AppFabric cache also contains a lot of features for monitoring and logging. The simplest command is the Get-CacheStatistics that show you stats of the cache:

Next time you are thinking about caching in SharePoint (or any other .NET application for that matter) consider using AppFabric caching. It’s a great and versatile middle-tier caching framework with near endless configuration possibilities. I know that this simple yet powerful framework can make a big difference in any of your projects. And why invent some own caching framework when we have something beautiful as this!

This is a short story about how you can get and resolve stale Managed Metadata Service (MMS) databases in SharePoint 2010. I’ve been working with Managed Metadata quite much and done some backup/restore juggling from production to test and to dev environments. Which by the way works really smooth. I’ve also recreated the MMS databases a couple of times. After applying Service Pack and the re-released June 2011 CU I went into Central Administration to take a look at the databases and their upgrade status.

The 65th SharePoint Pod Show is out featuring…tada…me :-) The SharePoint Pod Show is THE podcast about SharePoint and is done by Rob Foster, Nick Swan and Brett Lonsdale and has featured a lot of great SharePointers from all around the world throughout the years. If you haven’t already listened to the podcasts, then you got 65 episodes to catch up on! There are some epic ones, such as my favorite one #50 - which is about performance tuning.