Everybody has something to say about Windows Vista, good and bad. Most often I hear complaints and especially on the User Account Control. Today the Swedish IDG website had an article about the 10 most annoying things with Vista and how to solve them, and of course one of them was about the poor UAC.

I must say, and I have been using Vista since before RTM, and only found the UAC annoying during the first few days, when installing the machine. Since then I barely notices it – and if I do, I know why and I can feel more safe using my machine. 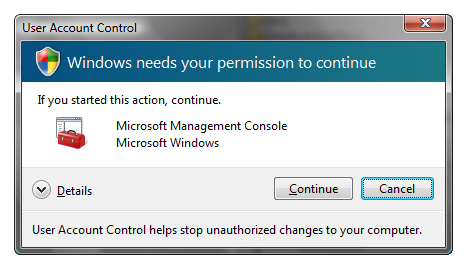 The User Account Control was not thrown into Vista just to cause warning dialogs whenever you do something that you should be careful about. It is put there to make you aware of that you or an application is making changes to something that may have an effect on your machines configuration and/or security.

During your initial installation and configuration phase with your Vista machine this may of course be annoying since you are doing a lot of installs and configurations, but during normal usage you should not see it at all. I see the UAC dialog about twice a day on my laptop which I use for developing and this is when I start the necessary services (like SQL Server, which I have set to manual startup) and when I start Visual Studio for doing SharePoint development (I have installed WSS on my Vista). Then once in a while UAC is shown when I install/uninstall some new applications. At home on Media Center I have not seen it in ages.

I’ll just turn it off

Most Vista UAC tips and tweaks states that you should turn the UAC off and so did the article I referred to. This is a completely working solution – but I do not think that it is any good solution! Anyone recommending this solution should immediately quit their jobs and do something else.

We Windows users have had some rough years prior to Vista with viruses, Trojans and worms infecting Windows machines due to bugs in applications and uncareful clicking on mail attachments. Recommend to turn it off will set us back a few years…but it’s up to you.

The UAC is designed to be annoying

Yes it is! If it wasn’t annoying then you wouldn’t notice it – and it would not make any sense having it. The UAC is not designed for power users, it is mainly designed for normal Vista users, like my mother for example. I have previously helped her with removing stuff from her machine that she had no idea that she installed. Now with Vista and UAC I have not had the “pleasure” of that.

As a power user, who often tries new programs, I will be aware of when a program tries to write to the system folders or registry and I can allow or disallow it.

I think UAC is here to stay. Hopefully Windows 7 may contain some tweaks to make it more responsive, since starting the Task Manager with elevated privileges during a 100% CPU usage really sucks.

Lot of web sites uses a login page so you can identify yourself and so that the application can target information for you. I use a lot of different sites and does a lot of logins and I must say most of these login pages are not user friendly. A login page normally consists of two input fields, for username and password, and a button to make the actual login. In most cases there are a checkbox which you can check to make the application remember your login, by using a permanent cookie.

I noticed some interesting stuff on some “leaked” screenshots from Windows 7 (M3) – there are some changes going on in the lower right corner. I can see a couple of changes that draws my attention. “Hidden icons” icon The icon you can click on to show the hidden icons in the notification area has changed. Is it more than this? By the looks of the icon my guess is that it is more than just showing the hidden ones.