But the article did not test Internet Explorer 8 beta, which I think should have been there (at least for reference). Since the IE8 team claims the performance is so much better, and my feeling after a few days of IE8 usage says so I had to do some testing on my own.

I used the same JavaScript benchmarking tool that was used in the article - SunSpider JavaScript Benchmark.

The results was not as I expected - yes, I did expect IE8 to perform better! 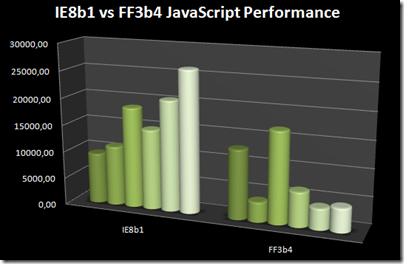 The results show that Firefox 3 beta 4 performs 2-3 (or more) times better than Internet Explorer 8. It’s an improvement since IE7, but not as good as I was expecting.

Now we have to consider that this is the first beta of IE8 and its beta 4 of Firefox 3, which means that we will see some changes in this test in the near future. Just look at the graph in the article and see the improvement from FF3 beta 3 to beta 4, about 200%.

Worth to notice is also that the script running times with IE8 was steadily increasing!

Another interesting thing is that Internet Explorer 8 had a test deviation of about 60-70% while Firefox 3 had about 20%.

I did the test on my Windows Vista Ultimate SP1 machine and run the tests on clean browsers one test at a time and then switched browsers.

I think it is great that the two major browsers get heavily improved JavaScript performance in their upcoming versions, especially Internet Explorer which really sucked on this point.

On the other side, I consider myself an optimization nerd sometimes and really like to do high- and well-performing JavaScript coding. This will not be that visible anymore :-(

ECMA International TC46 has updated the XML Paper Specification documents to working draft version 1.1. The new drafts can be found here as PDF or XPS and the changes can be found here (only as PDF :-) in the issue list. It seems like there are no major changes, mostly minor and editorial changes. I think we can expect some more changes when Office Open Xml has gone through the last steps of the ISO Fast-Track procedure, especially the references to the OPC.

Recently my laptop (DELL XPS m1210) has been really sluggish and I have had several BSOD’s when I have been working with it. I try to keep it pretty optimized and up to date so it will behave nice. I think I’ve read most of the optimize Vista articles and posts and I always keep track on which processes and services running and how much memory is used etc etc.