Microsoft is currently in the middle of the process of creating the next generation Microsoft web browser, with the fantastic name - Internet Explorer 8.

A few days ago, the IE team reports, the internal build of Internet Explorer 8 passed the Acid2 browser test, which is used to ensure proper support for web standards. 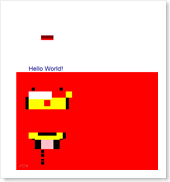 This is not the case with IE7, take a look at the picture on the right, it should render to a nice smiley…

During the first half of 2008 a (public) beta of Internet Explorer 8 will be released, which is great news. I really hope that we all will get the opportunity to test quite early builds so the community can have their say. Internet Explorer is the browser that receives the most complaints, so if a lot of web standards devotees have their saying in the development/evolution process of the next generation IE we will probably get a better browser.

My guess is that with some luck we will have a new Internet Explorer to download for next Christmas.

If you are interested in some more reading on the predictions on Microsoft releases for 2008 during the weekends then check out Mary Jo Foleys - What’s on Microsoft’s agenda for 2008 or Steven Binks - What to expect from Microsoft in 2008.

Not only the Office clients and servers got patched yesterday, Microsoft also released an update to Visual SourceSafe 2005. The update contains a number of hotfixes which includes performance, usability and stability improvements, as well as improvements to compatibility with Windows Vista and Microsoft Visual Studio 2008. Download it here (KB943847)

The ECMA Technical Committee 45, continues to comment the comments received during the Office Open XML ISO fast-track procedure and have now reached to two thirds of them. The response to comments are only sent to the national bodies The last set of proposed changes contains one major interesting thing; OOXML, or DIS 29500, is proposed to be a multi-part standard, which some national bodies suggested. The parts are: DIS 29500-1: WordProcessingML, SpreadsheetML, PresentationML and SharedML specifications DIS 29500-2: is the Open Packaging Convention, OPC DIS 29500-3: the extensibility specification This is not a big shocker, I imagined it coming, but anyway I’m glad they made the change(proposition to change).