I’m really glad to see some patches being rolled out for Office 2013, SharePoint 2013 and Office Web Apps 2013. There’s some really important fixes and some very interesting fixes that I’ve been waiting for. In this post we’ll take a look at the first Office Web Apps 2013 (WAC) update – specifically we’re looking at how to patch your WAC farm to minimize the downtime. If you follow my instructions you will have zero downtime (except for a brief moment where Excel stuff will not be accessible).

For this sample I will have a SharePoint 2013 (RTM) farm connected to a WAC 2013 (RTM) farm. The WAC farm is load balanced using NLB, like illustrated on the right.

On order to update our WAC farm we need to download the March 2013 patch for Office Web Apps 2013. You can find it at Microsoft Download center and it is called “Update for Microsoft Office Web Apps Server 2013 (KB2760445)”. The KB article does not reveal much of what has changed, but if you take a look at an earlier patch KB2760486 (March 5th) you’ll notice some really cool things. If you don’t have time to read it – I’ll show you some of them at the end of this post. Ok, you do not have to install KB2760486, you only need the KB2760445 one.

After downloading the patch and copying it to our WAC machines we can start the patching process. We would like to do this without the users even noticing it. First of all we need to take one of the servers out of rotation in the WAC farm. You do this using the load balancer. In my case I’m using Microsoft NLB and using PowerShell this is an easy task. Next thing to do is just remove the WAC server from the WAC farm – that is also a one-line PowerShell command. WAC Servers should only be patched with the binaries installed, not when they are participating in a WAC farm.

These two lines does the trick:

NOTE: You MUST remove the machines from the old farm before patching and then later create a new WAC farm (follow the instructions thoroughly). You cannot patch a running WAC Farm!

Once this is done the server is no longer receiving requests and it’s no longer a part of the WAC farm and we can start patching this machine. All our end-user requests are now going to the remaining server(s) in the WAC farm.

To patch the machine start the downloaded .exe file (wacserver2013-kb2760445-fullfile-x64-glb.exe) and just follow the instructions; accept license agreement etc. You will be asked to close any PowerShell (IDE) windows that has the Office Web Apps module loaded and you might get asked to reboot once the update is finished (there’s of course no harm in doing it anyways).

When the patching is done (and you rebooted) we need to create a new WAC farm, on the patched server. You do this using the same way as you did for the RTM version. Use the same server name as your old farm, same settings and the same certificate.

Once the new farm is created you have a few options depending on how many servers you have in your WAC farm. For instance if you have more than two, then you can take another one out of rotation, patch it and join it to the new and patched farm and then you flip the load balancer so it points to the new WAC farm. Depending on your load balancer you might have a brief moment where end-user request might be served by both versions. A bit funky situation but it works, as the illustration below shows:

As you can see, simple PowerShell operations this time as well, and this can (and should) be automated.

Once the other server(s) are patched, you need to join it to the newly created (and patched) WAC farm – just as you normally join a server to a WAC farm. And then you’re done. You’re farm is now patched and ready! But wait, there’s some stuff you have to do on the SharePoint side to enjoy all the new cool features.

One of the most interesting new features in the March 2013 update of Office Web Apps is the ability to view PDF documents! Yup, you heard me right! The March 2013 update contains a couple of new WOPI bindings that enable viewing and previewing (even mobile views) for PDF documents. These new WOPI binding has an application name called WordPdf. If you try to use the New-SPWOPIBinding cmdlet and just specify the WAC server name, you will get an error – since you already have those WOPI bindings. What you need to do is to specify the name of the application as an extra parameter to the command, like this:

Another approach could be to remove all the bindings and then add them all back again – of course this would cause a few seconds of downtime, and that’s not how I roll…

Once you’ve run that command (and waited a couple of seconds) you can start previewing PDF documents in your Document Libraries. And now we got yet another good reason not to install the crapware called Adobe Reader! 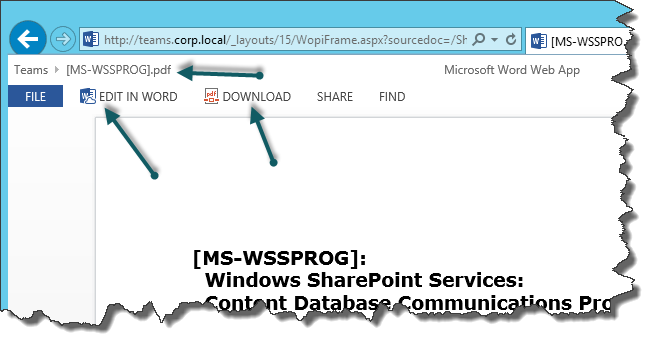 Now, your end users can start taking advantage of all the new features in the March 2013 update.

If you’re examining the WOPI bindings provided by the March 2013 update really carefully, you’ll notice that the Excel application has six new bindings, three each for the two new actions syndicate and legacywebservice. We cannot use these two bindings in SharePoint 2013 RTM – the New-SPWOPIBinding cmdlet does not accept those actions. They are not a part of the well-known WOPI action values (as specified in the WOPI specification available when this post is written) – and I have at the moment no clue of what they are doing…stay tuned…

You’ve just seen how simple patching an Office Web Apps 2013 farm is. Compare that to patching SharePoint! By using the load balancer effectively you can make sure that the end-users can continue to use the Office Web Apps features while you’re doing the patching. Enjoy!

In my last post (still smoking fresh) I showed you how to update your Office Web Apps 2013 farm to the March 2013 update, connect it to SharePoint 2013 and being able to view PDF documents in the browser. What I didn’t explain or show in that post was how to enable the PDF Previews in Search – but I’ll do it now. Pre-requisites Before you start fiddling with this, you need to make sure that you have the March 2013 update of Office Web Apps Server 2013 (WAC) installed and connected to your farm – if you don’t know for sure, ask your admins – sometimes they know…if they don’t give them the link to my previous blog post.