Due to the large amount of users still using Internet Explorer 6 a campaign has started to save developers from having to making specific adaptations to IE6 - SaveTheDevelopers.org. 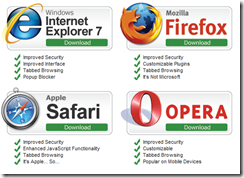 The Save The Developers site contains a script that anyone can place on their web site and it will show a warning to IE6 users and urge them to upgrade to any of the four major browsers; Internet Explorer 7, Mozilla Firefox, Apple Safari or Opera.

Internet Explorer 6 still represents 31%, almost one third, of all browsers according to TechCrunch, while this site has about 15% (which I find quite high…).

Join the cause, add the script to your site, recommend people, friends, parents, customers and colleagues to upgrade.

Apple have now released the final version of the Safari browser to Windows, which has not gone unnoticed since they are pushing it as a pre-selected optional update to QuickTime or iTunes. I still refuse to install iTunes on my machines so this approach from Apple is not new to me. As soon as there are any updates to QuickTime Apple recommends me to install iTunes, via Apple Software Update.

Today is the last day that the national bodies can change/update the votes on the Office Open Xml, DIS 29500, approval as an ISO standard. I really hope that enough NB’s change their votes so we can have OOXML as an ISO standard - I know we will all gain on this. To get a hint in which direction the result is going Andy Updegrove has set up a Vote Tracker, which he will continuously update until we have the final result.