Note: this article contains some registry changes that never ever should be done on a production server, unless told by Microsoft support…or whatever…

What is the Health Score?

Let’s start with some background facts. Stop whining, I know plenty of peeps have already blogged about it but I think it is good to have all the facts in this same blog post.

How the SharePoint Health Score is calculated

“The current health score for web application is X”

You can easily retrieve these performance counters by using the following cmdlet:

You can also use the [

Buckets, what is that!?

Adding your own ,monitor

To add your own performance counters to monitor you need to use the API. Here’s a sample on how to add the CPU usage as a monitored object. You should not add this one into any production environment, but it can be used in testing scenarios when you would like to see what happens when the Health Score is high.

The Health Scores are by default updated every 5 seconds. You can get (or set) this setting by looking at the

To avoid having spikes in performance counters creating high Health Scores, the actual value is calculated from an average of a number of samples, by default 12 samples. This can be configured using the

How SharePoint uses the Health Score

Now you know a little bit more on how the SharePoint Health Score is calculated. So what is it used for then? SharePoint internally uses it for mainly two reasons; HTTP throttling and for the Request Management Service.

Throttled requests are met with the Error message above: “The Server is busy now. Try again later”, and the HTTP Response: “503 Service Unavailable”.

When entering the second stage of throttling, you will see the following lines in the ULS logs. The logs also includes the “Excessive” counters.

To the Server is Busy response SharePoint also adds two Response Headers; one called “Retry-After” which contains a numeric value which should be taken as an indication (by clients) when a retry operation should be done (it’s always has the same value as the Health Score refresh interval) , and a second one “SharePointError” which always has the value of “2”.

By the way, if you notice the nice little error icon in the Busy error. That image is not throttled, why? Well, I can tell you…there’s actually an exclusion for that specific image with regards to resource throttling. Requests to that image will never be throttled.

There’s this myth out there that POST and PUT requests are never throttled. Well, that is to good to be true! My tests and reverse engineering skills shows that all requests are throttled in SharePoint 2013 (I would be glad to be proven wrong :). Fortunately Office 2010 and later has the “Upload Center” which will retry any save operations and eventually succeed once throttling has stopped.

But, using one of the built-in classifiers we can actually make sure that our precious documents are saved regardless of HTTP Throttling, and this is how this is achieved.

First of all we create a new classifier of the type

, when creating that object we pass in “POST” as HTTP method, make sure it’s using the HttpMethodMatch method to match the method :), and finally we tell it to never throttle these requests. We add this classifier object to the throttle settings of the web application and badabing, POST operations are not longer throttled.

Ok, so you’re fed up with this throttling and want to turn it off. It’s an easy operation and you can do it from Central Administration or from PowerShell. In PowerShell just update the

of the web application. And in Central Administration you select the Web Application for which you want to turn off throttling, then select General Settings > Resource Throttling, then at the bottom of the dialog you will find HTTP Request Monitoring and Throttling.

The HTTP Throttling is actually a quite smart implementation, and internally tries to fix your machine if throttling occurs. One thing that is important here is if you start fiddling with the different performance counters used for calculating the Health Score, make sure that you do not remove the monitor that monitors memory usage. That plays a special role in the throttling scenario. If that specific monitor is considered an “Excessive” monitor, which means that it has an Health Score of 10, it will actually force a Garbage Collection.

For more information about Request Management read Spencer Harbars series about it.

How to use the SharePoint Health Score

Whenever you’re building a client that interacts with SharePoint 2013, for instance a SharePoint App, a Windows 8 app or a Windows Phone app, then you should strongly consider always take the Health Score in consideration. You will receive the

response header for each and every CSOM, REST or web service call to SharePoint. If the value is 10 (and SharePoint starts throttling) then you will most likely not be able to get data. If your application is constantly polling SharePoint for information, perhaps you should increase the delays between your calls when the Health Score raises above a predetermined number.

Andrew Connell has a small code sample on how to leverage this in a Silverlight app.

You could also use the Health Score in traditional SharePoint Farm solutions (timer jobs, or other long running or resource consuming operations) using the

object. Here’s a quick sample how you can show the data in a Web Part:

This Web Part retrieves the performance inspector object and then prints out the current Health Score for the current Web Application on the current machine. Also this Web Part will print out if throttling is currently going on (which you never should see anyways, since you’re throttled!).

How to debug the SharePoint Health Score

To wrap this little post up I will give you two great debugging tips – they both involve editing the registry (you’re warned!). First of all if you’re building a remote application that communicates with SharePoint and you want to test how it behaves at different Health Scores. Then there’s a neat trick to give a server a constant Health Score value. You do this by adding a new DWORD key called

hive and then do an IISRESET. You can give this key any value from 0 to 10 and the Response Header will always show that value. It will not invoke throttling though.

It will of course log a warning in the ULS telling you how bad this really is:

The second tip is a cool debugging feature, and its also a small regkey hack. In the same hive as above create a new DWORD key called

and give it the value of 1.

Once again you need to do an IISRESET. After that you can browse to any page and then append

to the address, for instance: http://site.contoso.com/debugthrottle. This will give you a sweet looking dashboard with all the details you need about the health of the server/web application. You can see the monitors and their Health Score history, the throttling stage, your classifiers etc. 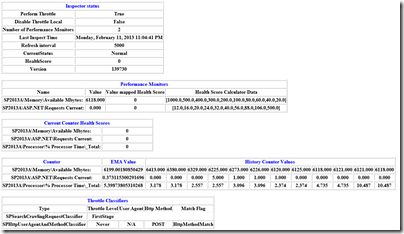 There you have it! All you need to know about the SharePoint Health Score and HTTP Throttling. As you can see it’s a really nice feature if used correctly – by you, by third party vendors (I’m pretty sure 99% of the vendors do not care about this though) and by SharePoint itself. Just one final word of warning – if you’re fiddling with monitors and classifiers make sure that you thoroughly test them, it’s really easy to get things funked up here…

With this new wave of SharePoint, the Office Web Apps Server (WAC – I don’t like the OWA acronym, that’s something else in my opinion) is its own server product, implementing the WOPI client protocol, which allows a client to retrieve documents from SharePoint on the behalf of the user. Documents will flow from the WOPI servers (SharePoint, Lync, Exchange etc.) to the Office Web Apps Server – this means that potentially confidential information will be transferred from the SharePoint environment and stored/cached on another server.

Last week the Forefront team finally released Service Pack 3 for Forefront Unified Access Gateway (UAG) 2010. This is a long awaited release for us working with SharePoint 2013 and for those using non-legacy operating systems and browsers. In this post I will show you how to publish SharePoint 2013 Host Named Site Collections through UAG 2010 SP3 and consume the published site using Internet Explorer 10 on Windows 8.