About a year ago I wrote a blog article called SharePoint Team sites are dead. An article that stirred up many feelings in the community and started an interesting (and somewhat harsh) discussion - which was kind of the point. Fast forward to May 2016 and this is a totally different ball game! SharePoint Team Sites are back!

Jeff Teper, CVP at Microsoft, writes in the just now published The Future of SharePoint blog post: “Team sites has always been at the heart of collaboration with SharePoint”, a statement I absolutely agree with. Team Sites is what made SharePoint such a successful product. The post I wrote about how Team Sites are supposed to be dead are still true though - Team Sites are not what they used to be, they have transformed and merged with Office 365 Groups into something more powerful - the new Modern Team sites.

For the last year or so I’ve been fortunate and been part of a smaller group that has had a continuous interaction with the product team (both marketing and engineering) and we’ve been shown what they have been working on and we’ve given them feedback. The product team has been awesome in this dialogue, and in the way they have taken Team Sites out of the dark ages and into a new more modern way of working and at the same time listening to our opinions.

If you’ve been following my blog or me on Twitter, or met me in person, you couldn’t have ignored the fact that I’ve been a huge fan of Office 365 Groups. Although I also been very transparent that they have not been the silver bullet, given some of their shortcomings, of which almost all has been resolved over the last few months. And the Roadmap of features and improvements of Office 365 Groups are just top notch. The power of these new Modern team sites is the fact that they have merged with Office 365 Groups, giving team sites many of the features that we previously had to build and customize.

Yes, this new experience will prevent some customizations that we’ve previously been used to doing. But this is a good thing. This allows for a much better life cycle management of SharePoint Team Sites. We all know what’s the most expensive part of any SharePoint project - the upgrade piece, the thing that happens a couple of years after the initial project. In this new world of evergreen services - I expect to see this coming to the on-premises version of SharePoint as well - we are in a continuous upgrade mode. We don’t have time to spend on upgrades, it should just work. This new model; including the new page experience and extension framework; allows for this. 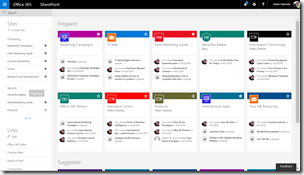 Also back in December 2013 I wrote another blog post (seems like ages ago) in which I questioned the fact that the brand SharePoint was going to survive. At that time there was no mention of SharePoint at all in the end user interface in Office 365 - it was just known as Sites and Microsoft was very mellow on the whole on-premises piece. Worth noting is at that time the leadership of the SharePoint team was not as it is today.

Fast forward to 2016, Sites will be renamed to SharePoint. Finally! This is something that I have been longing for. But this is not only a rename of the tile in the waffle. SharePoint home is your new start page, an aggregated view of your most active sites as well as the ones recommended to you by the Office graph, from both the cloud and on-premises. Not only that, the SharePoint home is also a new entry point for enterprise search and I also believe that this is just the first of many steps.

This SharePoint home experience is also the heart of the new SharePoint mobile app. Another experience that I’ve been trying out for a while. The “Intranet in your pocket” is what Microsoft calls this app. It’s not really there yet (as an Intranet), but the vision and ideas they have look great. Currently the app gives me great insights in the Team sites I’m participating in, the activities happening in them, the documents and even plain ol' SharePoint lists, and I can search for documents and people. Another great feature is that they by default have built-in account switching and it works for Office 365 and on-premises. Good job!

I find it very interesting that Microsoft finally talks about SharePoint as an Intranet. They haven’t done that for a long time. The versatile SharePoint development platform is now being more streamlines to a specific set of workloads within the Digital Workplace and employee experience. I think this is a good move and hopefully customers can get started with SharePoint without spending to much money and time on building the Intranet features. I wouldn’t be surprised if we see more Intranet features, like news and portals, in the near future.

Not only is this new modern team sites equipped with a great user experience, it is also customizable through the new page model and the new extension model called The SharePoint Framework. This new model allows you to still do the the customizations that once made SharePoint so famous and feature rich. This time the improved extension model is all based on client side technologies; no WSP, no sandbox, no weird SharePoint hosted apps. What we get is something more modern that potentially can attract new developers to the realm of SharePoint. This part I’m particularly excited about and please read this post I’ve written, that is dedicated to the SharePoint Framework.

One of the most important aspects of the SharePoint Framework and the approach to base it on solely client side technologies, is that this allows the SharePoint team to slowly move away from the (deprecated) ASP.NET Web Forms model that has over the years caused us so much headaches.

And what about Yammer

These new announcements are all about SharePoint. Yammer is not a part of SharePoint. None of the blog posts from today mention the Yammer service and during the virtual event today, Yammer was just mentioned briefly. I draw my own conclusions from this and you have draw your own.

What we’ve seen today and moving forward is just the beginning of the Future of SharePoint. I’m very excited about what we will get over the next few months and following that.

Updates, updates and updates. This time around there’s a great deal of clean up on the Office Roadmap. Mayhaps they are adding space for all the neat SharePoint things we expect to see next week at the SharePoint Future event. There’s also a bunch of new stuff added to the In Development category, scroll down and learn something. Also worth noticing is that the Yammer team has started to catch up on the feedback they received over the last few years.

Today at The Future of SharePoint event Microsoft have announced the next iteration in SharePoint development - the SharePoint Framework. As one of the old ones who started with the Digital Dashboard Resource Kit, to the COM+ event handlers in SharePoint 2001, over to custom built DDFs, to WSP’s to Apps and Add-ins - this new framework is a very welcome change. For years SharePoint Developers have been forced to walk in shame in the outer rims of the developer guild.