And now the results

All but one answering this survey said that they were using virtualization in their SharePoint environment. Not that surprising - I guess that if you don’t virtualize then you do not even bother to look at the survey.

Since this survey did not specify if it was for production, test, staging or development the answers on what virtualization technology that was used was quite spread. Microsoft Hyper-V and VMWare ESX Server was the two products that most survey participants used. Not surprisingly was Microsoft Virtual PC right behind those two. 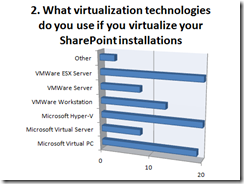 But what is virtualized then? The Web Front End was the clear “winner” with the Query service as a runner up. A quite high number of respondents answered that they were virtualizing the database role (73,9%) but only half of them could really recommend it (37,2%). The Excel Services role was something that about half of the participants virtualized (47,8%) and recommended for virtualiztion (44,2%).

The majority did not recommend virtualizing the database role (80%) nor the Index role (43,3%).

One thing that I really wanted to find out was why SharePoint is virtualized and here are what the survey participants thought:

Positive effect on the environment

Simplified development and lower hardware costs was the two ones that was quite expected. When looking at the license costs most people were neutral or thought that the license costs were higher with virtualization, probably due to the fact that you might need more (virtual) servers to have the same performance (only 7% thought performance was better with virtualization).

The numbers speaks for themselves and I do like that 74% also thinks that this has a positive effect on the environment.

Have a nice summer

Just in time for next version of SharePoint to arrive I just completed the final certification exam for SharePoint 2007, the 70-630 Microsoft Office SharePoint Server 2007, Configuring. As always I did think that it should be some tricky questions or problems to solve in the exam, I even installed a MOSS RTM last night just to walk through the admin interfaces before the infrastructure upgrade. But to my disappointment this certification was by no means any challenge.

Introduction Microsoft SharePoint contains functionality for Records Management, which essentially is a storage for documents that you would like to store and manage in a separate records center to meet certain legal or other requirements or just to make backups of certain document revisions. To be able to create a Records Center you need to have Microsoft Office SharePoint Server 2007 (MOSS). On the other hand you only need Windows SharePoint Services 3.