Once upon a time Microsoft decided to give the users of Windows Vista the opportunity to buy an extra expensive version – called Vista Ultimate. Buyers of this version would eventually get some nice and exclusive content and applications to their sweet new operating system. Microsoft did deliver some nice enhancements such as animated backgrounds and new sound schemes – certainly worth the extra cost.

Let’s stop this nonsense and cut the the point…

Yesterday Microsoft released a couple of new extras. Not the big deal yet, but for once something really funny – a new game called Microsoft Tinker. A sweet little game where you should move a robot around a course with as few moves as possible and as fast as possible. It’s pretty funny and amusing. 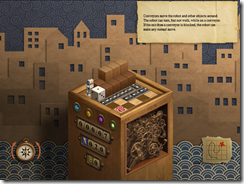 If you have Windows Vista Ultimate, head on over to Windows Update and get it.

Microsoft SharePoint is a great development platform but it have some major areas where it could be improved. As of today you can create mediocre applications using the current SDK (which is not so well documented), but to create great applications you really need to understand how the internals of Windows SharePoint Services really works! I would like to show you an example of how bad the documentation and implementation is with a pretty common scenario.

Lot of web sites uses a login page so you can identify yourself and so that the application can target information for you. I use a lot of different sites and does a lot of logins and I must say most of these login pages are not user friendly. A login page normally consists of two input fields, for username and password, and a button to make the actual login. In most cases there are a checkbox which you can check to make the application remember your login, by using a permanent cookie.