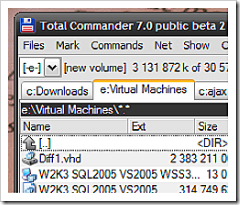 My favorite Windows Explorer replacement Total Commander is in beta for version 7.0.

Version 7.0 contains mostly a nicer interface but includes some highlights such as:

I have been a huge fan of the application since I first discovered it years ago (when it was called Windows Commander). When DOS was the primary interface of the PC I used the ASCII based Norton Commander for DOS.

Yesterday I abandoned my streak of Sony-Ericsson mobile phones which started many years ago. In fact it started when I was studying and working for the summer at one of Ericssons mobile phone assembly lines with the GH-688. Since 1996 I have been using them, except for a short period when my employer forced me to use a Nokia. I was choosing between upgrading my Sony-Ericsson P910i to a Sony-Ericsson P990 or the HTC TyTN.