A few days ago Microsoft officially released a modified Royale theme in black. The Royale theme is the one used in Windows XP Media Center. Now there is an updated variant of that theme called Zune desktop theme, download it here. This theme looks really great and matches the black and silver themes in the new Office 2007 and the default theme for Windows Media Player 11. 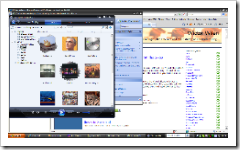 RSS 2 PDF is a nice web application that turns an RSS into a PDF file, which can be useful when you would like to store a feed. The result is a PDF document with bookmarks to all posts in the feed. Try it out for my feed here.