Finally I’ve found the time to make the last work on ChartPart 2.0 for SharePoint. I have been working on and off on this release for quite some time – but now it’s here!

ChartPart 2.0 for SharePoint is a Web Part that allows you to instantly create charts based on your existing SharePoint lists. You can make columns, bars, pies and even 3D charts. 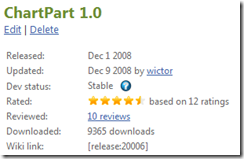 ChartPart version 1.0 was released last year and have had up until now close to 10.000 downloads, which I’m very proud of. I’ve received awesome feedback on the Codeplex site, on Twitter, my blog and when I met people and told them that I was the one who made it.

ChartPart 2.0 has been in beta/RC for quite some time and has had about 4.000 downloads, which also is awesome! People have been asking me when is it due, when is it ready…and now it’s done! It’s uploaded and free to download. You can even get the source and make your own implementation.

ChartPart 2.0 contains a number of new features such as; better 3D charts, more customization etc. But the most interesting two things are 1) you don’t have to install it in the GAC (which several people asked med about) and 2) you can connect the ChartPart to a list view and filter the graph. 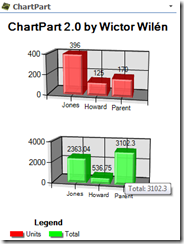 Another interesting feature that is new in 2.0 is that you can edit the .webpart files and set a Lock Down Mode. This allows you to restrict your users from editing certain properties, such as colors, graph types etc. This is one feature that I hope can make the ChartPart 2.0 be used in larger companies.

I’d like to thank all the thousands of people who has helped me out by downloading ChartPart 1.0 and those who has submitted issues on Codeplex. A special thanks to those who helped me with the translation into other languages; Arash Aghajani, Frank, Alexander Bautz, Anders Dissing.. 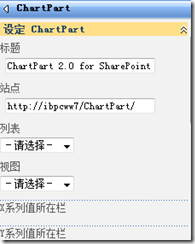 Last night we had a SharePoint User Group Meeting here in Stockholm, Sweden. It was a great evening with a lot of attendees, thank you all for showing up. It’s always fun to see new and old faces, sorry I didn’t have time to talk so much with you (due to my VM’s crashing just before my demos…). First, a big thanks to KnowIT and Jonas who provided us with a great place to host the meeting and some good food and beer!

Developing solutions and features for SharePoint is a nightmare for all beginners, and even for the experienced SharePoint developers. If you ever have had the opportunity to create a SharePoint solution you most probably have had to make a lot of hacking in a bunch of XML files, just to build a simple feature. This is the way you have to do it, and the way taught by tutors and Microsoft, when using it with Visual Studio and no add-ins.