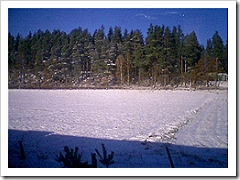 It’s snow in Sweden to everyones surprise! Yesterday Stockholm in Sweden received a few centimeters of snow and the quicksilver reached a few knots below zero degrees Celsius and the whole town went crazy. Cars in the ditches, cars in the wrong lane, busses burning rubber on the ice, frozen train switches…you name it!

The thing that amazes me is that it comes as a surprise every year, we have been having snow and winter here in Sweden for the last 10.000 years!

Today I’m sitting on a train, going to Gothenburg for a meeting. I am lucky this train is only an hour late, but crowded with people from other cancelled trains. The trains are supposed to have Internet access but the wireless network and the gateway is overloaded of everyone trying to do something useful instead of watching out and look at the beatiful landscape; the sun is shining and the trees are white of snow.

I’m going back to Stockholm later this day, and I really hope that I will get home before I’ts time to go up again, and change to winter tires :-)