It’s that time of the year, when you’re thinking about what you’ve done and accomplished the last twelve months. I’ve been writing a summary for the last five years (2006, 2007, 2008, 2009 and 2010) and I always think it’s fun to look back at the year gone and do some predictions for the upcoming one.

This year has been totally crazy - I’ve been enjoying my work and clients/projects at Connecta and I totally love that we have such a strong team and offering. I can really feel the momentum we have in our team and projects, and nothing is stopping us now…

As usual I’ve been jotting down a couple of blog posts, some better than others (IMO) and unfortunately there are several that I just haven’t had time to publish. I have on average 1.000 subscribers to my feed and a whole lot of other users finding my writings through the search engines - thank you all readers! These are the top ones for the last 12 months.

Interesting to see jQuery and JavaScript posts topping the list - might give us a hint on what’s been popular this year… The post that still is #1 is the Fix the SharePoint DCOM 10016 error on Windows Server 2008 R2 (remember where you read this first :-). 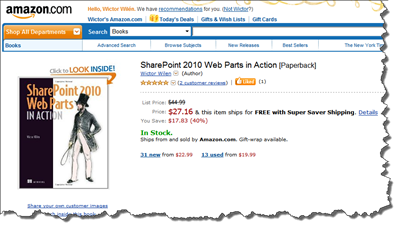 I also finally got my book SharePoint 2010 Web Parts in Action published in April. It took over a year of writing, re-writing, testing, reviewing etc etc to get it done. And when the books finally arrived in printed form it was such a great feeling. It’s a tough competition on SharePoint books nowadays, and I’m glad to see quite good sales figures and especially great reviews (if you haven’t already - head on to Amazon and tell me what you think).

In April I was re-awarded the Microsoft Most Valuable Professional - SharePoint Server award. This is an award for your on- and offline community contributions. Being a part of the SharePoint MVP community is great and gives you a lot of amazing contacts with some great people.

The MCM - Microsoft Certified Master - program was the highlight of the year! In April/May I attended the R8 rotation of the SharePoint 2010 MCM program which was three long and tiresome weeks with best-in-breed SharePoint training by the best of the best. I passed all three written exams and the qualification lab on first attempt and was allows to call my self a SharePoint 2010 MCM in the end of May. Since that rotation I’ve really felt that my SharePoint skills and confidence has improved - and I do think that also my customers feel the same. I did a post about my experiences of the MCM program a couple of months back - and if you’re interested go ahead and read it.

This year has also been filled with a lot of conferences and travelling. First of all in march all MVP‘s met up in Redmond, at the Microsoft campus, for the annual MVP Summit. This was my first visit to Redmond and the summit and I met a lot of the people I’ve only met through the online world previously. I had a blast with paintball, late nights and beers talking to some really great friends. A couple of months later I went back to Redmond for the MCM - the weather was the same as in March! October and November was quite hectic with another trip over the pond to the SPC 2011, a trip to the European SharePoint Conference in Berlin and finally the Southeast Asia SharePoint Conference in Singapore. I also managed to do a couple of conferences on home turf as well.

I’ve already planned a couple of trips for 2012 - at least two trips to US again, one is the SPC 2012 in Las Vegas where I hope to meet a lot of you. I have also planned a trip to London in late April for the International SharePoint Conference. This will be an extraordinary conference with two really cool tracks - one IT-pro and one dev, where we’ll build one big solution during three days. I promise to get back to you with more information about it as soon as it’s available.

Yea, as usual this year has been all about SharePoint for me. I’ve seen the product mature, I’ve learnt more about it (again) than I ever could expect and I see a huge and increasing demand for the platform. If you’re new in IT - bet on SharePoint! We’ve also seen the birth of Office 365. I’m running both my work and personal e-mail in the hosted Exchange solution and I’m very satisfied. This fall I’ve spent a lot of time with SharePoint Online trying to do real work and deployments. To put in in nice words I should say that I’m more of an on-premise guy!

In these recap posts I’ve done some predictions for the upcoming year. I had three last year and I was right about two of them: Windows 8 is communicated and with Hyper-V support.  I’ve been thinking quite hard on what predictions to have this year, trying not to reveal anything or stating anything obvious. So here are my predictions for 2012.

What do you think?

So, I do not think I will be posting anything more this year! It’s been a fantastic year but I’m sure 2012 will beat 2011 big time. Thank you all readers and followers and thank you to all new friends I’ve met throughout this year and thank you to everyone supporting me and has to put up with late night IM’s or e-mails (you know who you are!).

Now, enjoy your last days of 2011 and have really great New Years Eve - I know I will (even though enjoy incorporates some work!).

The last week I stumbled upon a really interesting new and shiny User Profile Synchronization issue - one of these things that just make your day! We had to manually initialize a full synchronization, after doing some updates to one of the user profile properties, and the user profile synchronization would not just start… Everything looked fine (on the surface) and we tried the incremental sync, which also looked like it was starting but nothing happened.

It is always fun to get back on site after a couple of days off work. SharePoint 2010 is like an annoying little critter, if you’re not there to cuddle with it it will do the most strange things. I currently have a support case open regarding some issues with crawled properties (I hope that will be another story to tell another day) and went into the Search Service Application admin pages in Central Admin to check some things.