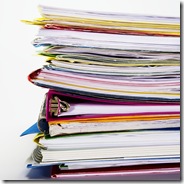 The standardization of the XML Paper Specification (XPS) as an ECMA International standard proceeds. Adrian Ford reports that the initial working draft has been published on the ECMA web site.

There are no major changes as of now to the original specification by Microsoft, but rather some editorial changes, read the latest draft here (available as PDF or XPS). Lets hope that the ECMA TC has learned from the recent Office Open XML ISO failure and get rid of all these non-issues that most of the OOXML comments really was about.

XPS and OOXML both uses the Open Packaging Convention (OPC), and I would like to know how ECMA will handle this part of these standards. Will XPS reference OOXML, or OOXML reference XPS or will OPC be a separate standard?

The next meeting for the TC is in late September, so I hope we get some nice reports from that meeting within a few weeks.

The net is crowded with SharePoint blogs, including this one, and I have missed one thing - information for the end-users. I think that there is a great void in knowledge for SharePoint users out there,for example how to use SharePoint as an end-user in the most efficient way, how to do the simple stuff such as creating sites or lists etc. Today I stumbled upon “Get the ‘Point” by Suzanne Ross, which has a focus on the SharePoint end-users.

I’m really happy that CNET Download.com has reviewed my application msfeedicon, a free RSS plugin to the Windows RSS platform. The rating is 4 stars of possible 5 and here is the review: If you cant get through the day without checking your RSS feed subscriptions, you’ll be glad to know about Msfeedicon: It perks up and simplifies Internet Explorer’s RSS feature by adding some functionality. There’s one caveat: The tagging feature described by the publisher didn’t work in our tests.